In 2013, CSI launched a special project involving children in 25 countries all over the world. The resulting exhibition takes its visitors on a journey through the different forms of school life, generating much enthusiasm.

The project in brief: 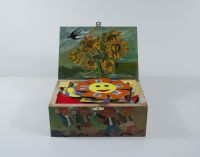 Between 2013 and 2014, CSI Lëtzebuerg sent 25 “treasure chests” to the four corners of the globe. Once these arrived at their various destinations, groups of children decorated them and filled them with objects, letters, photos, etc. demonstrating their culture and expressing why they regard education as a treasure. The result is most convincing: 25 mini-masterpieces reflecting the culture and thoughts of the children and presenting a genuine picture of how they live.

The treasure chests are as varied as the countries to which they were sent and the young artisans who decorated them. But they all have one point in common: education is perceived as a treasure constituting the basis for a happier future. Even the youngest children are aware of the importance of education, and they have displayed tremendous creativity and imagination in expressing this belief.

The treasure chests have been exhibited at Schooss (near Mersch) in October2014, at Wincrange in May 2015 and in Paris’s city hall in June 2015.

If you wish to support this project, please state “EDEV treasure chests”. Thank you.

Cookies make it easier for us to provide you with our services. With the usage of our services you permit us to use cookies.
Ok